Aircraft made an emergency landing in a field.

A small aircraft had engine problems forcing it land in a field near the Klamath Falls Airport.

The privately owned aircraft a 1948 Stinson 108-3 was operated by Clayton DARR of Anchorage, Alaska. After taking off from the Klamath Falls Airport the aircraft experienced engine problems caused DARR put the aircraft in a field near the 10200 block of Homedale Road at approximately 1:14 PM.

Deputies responded to assist the pilot and the single passenger. No injuries were reported. The aircraft suffered minor damaged due to being landed in the field. No reports of property damage from the property owners were received.

The Sheriff’s Office is assisting the Federal Aviation Administration with the investigation and whether or not the incident is going to be classified as a crash.

A single engine aircraft had just taken off from the Crater Lake - Klamath Regional airport when, for unknown reasons, crashed in a field south of the airport 3000’ off the end of the runway.

Upon arrival first responders found the plane in the field right side up, pitched to the side with a broken landing gear and two uninjured passengers.

“Two people were aboard the aircraft and were uninjured in the crash,” said John DuVal, Detective for the Klamath County Sheriff’s Office. “The aircraft is believed to be registered in Klamath Falls and that the passengers were just heading out on a day trip.”

According to John Barsalou, Manager of the Crater Lake - Klamath Regional Airport, the Federal Aviation Administration has been notified of the crash and that it was out of the airports jurisdiction as the crash occurred off airport property. Barsalou did confirm that the aircraft crashed on takeoff.

The crash remains under investigation. 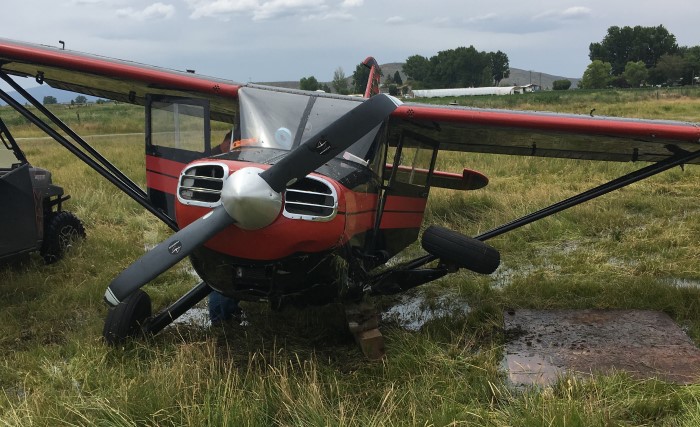